The Official Evasi0n Jailbreak iOS 8 archive contains information and update articles related to future iOS 8.0 jailbreak utilities, including both Pangu and Evasion, in addition to the jailbreak status for newer iOS 8 devices, such as the iPhone 6, 5S and iPad models.

Apple Releases 8.1.2, Is it Possible to Jailbreak 8.1.2 and Should I Update? - Today, in a surprise release, without having first entered iOS developer beta form, Apple issued iOS 8.1.2 (the second incremental 8.1.x update, of course succeeding 8.1.1) to the general public. As of now, unlike its predecessor, 8.1.2 cannot be jailbroken by way of either TaiG, being the latest 8.1.1 Untethered jailbreak or the older Pangu for iOS 8 through 8.1 utility, which was patched when Apple released 8.1.1. However, in light of the fact that it’s not currently possible to jailbreak 8.1.2, today’s news isn’t all bad for jailbreakers - we’ll elaborate on that shortly. As with past iOS 8 updates, in addition to being available via Apple’s iOS over-the-air (more commonly referred to as OTA for short) update ability, 8.1.2 can be downloaded, and fully installed, directly through iTunes. However, its absolutely critical that current iOS 8 through 8.1.1 jailbreak users avoid the latest firmware at all costs! Again, as alluded to above, being the second minor release since the company issued 8.1, the latest 8.1.2 update is just that, a minor release. In light of that fact, although it’s too early to state for certain, a number of vulnerabilities exploited in the TaiG jailbreak for 8.1.1 appear to remain unpatched in iOS 8.1.2. However, without an update to the utility, and more extensive testing to know for certain which of said vulnerabilities were addressed in 8.1.2, or more likely not addressed, it’s not possible for any device to jailbreak 8.1.2 when utilizing the latest TaiG jailbreak utility. Continue reading past the break for additional information concerning TaiG and how 8.1.2 plays into the latest jailbreak!

Apple Releases 8.1.1 beta 1, Is it Possible to Jailbreak 8.1.1 and is Pangu Patched? - Today, ensuing Pangu’s recent release of the all-new Untethered iOS 8 jailbreak 8.1 utility, it’s with heavy hearts that we deliver some rather disappointing news to those in jailbreak community. Last night, Apple seeded the first beta iteration of iOS 8.1.1 to those enrolled in the official iOS Developer program. The iOS 8.1.1 update, which is available for immediate download via Apple’s Developer Center for iOS, features a slightly revised build number of 12B432. Before we proceed any further, it’s paramount to mention that current jailbreakers should avoid 8.1.1. In what appears to be a minor update that rectifies bugs and increases stability and performance for both the older ipAd 2 and iPhone 4S, iOS 8.1.1, on closer examination is actually much more diabolical and contains a hidden agenda. Unlike iOS 8.1, a combination of the latest vulnerabilities exploited by Pangu in their new utility to achieve an iOS 8 through 8.1 Untethered jailbreak have officially been patched, making it impossible for any device to jailbreak 8.1.1 UnTethered using Pangu for iOS 8. For more on 8.1.1, as well as the firmware’s jailbreak status, continue reading past the break! 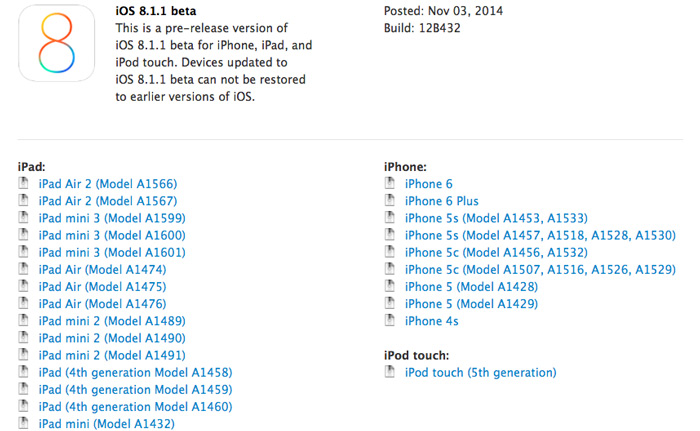 iOS 8.1.1’s release notes confirm that the latest beta firmware, as well as the build that will eventually be intended for public release are rather minor updates, intended strictly to rectify a few known issues and slightly improve performance on the older devices mentioned above.

That being said, while only slightly more stable than 8.1, it’s been confirmed by Pangu themselves that Apple has patched, at the very least, the method the team utilized to inject the Pangu8 jailbreak data, being their iAdm1n exploit.

How to Jailbreak 8.1 Untethered with Pangu for iOS 8 on iPhone 6 Plus 5S, 5C, 4S iPad Mini 3, Air 2, 4 and iPod Touch 5th generation - Wow - it’s actually here - today, Pangu released their all-new utility to jailbreak 8.1 fully UnTethered: Pangu for iOS 8.0 through 8.1.x! However, before you get too excited, there’s one catch, which is a rather significant one. As of now, the Pangu jailbreak for 8.1 doesn’t install Cydia, as Saurik (the creator of the aforementioned third-party graphical tweak distribution and acquisition interface) has yet to update Cydia Substrate for iOS 8. The way things currently stand, Pangu for iOS 8 is mostly intended for jailbreak developers to get a jump on creating iOS 8-compatible tweaks, as the utility enables full root access, and enables SSH, which is  jailbreaking on a fundamental and rudimentary level. However, seeing as there’s no way to determine when the loopholes exploited by Pangu’s new utility will be patched by an updated 8.1.x firmware, those interested in jailbreaking should take advantage of the current opportunity to do so,  as you’ll be able to install Cydia once Saurik successfully updates Cydia Substrate for iOS 8 through 8.1.x! For more on the exciting new Pangu jailbreak 8.1 utility, continue past the break.

Apple Releases 8.1, Can I Jailbreak iOS 8.1 Untethered? Upcoming Jailbreak to likely Support, and Jailbreak, 8.1 - Today, after only two developer beta releases, Apple issued iOS 8.1 (the first substantial 8.x update that introduces a number of enhancements) to the general public. Like its iOS 8.0.x predecessors, namely last month’s 8.0.2 update, 8.1 patches the Untethered Pangu jailbreak - although it sounds rather bleak, 8.1 provides a bright beacon of hope for the first iOS 8 jailbreak. Beyond the option to update to iOS 8.1 via iOS’ built-in OTA (an acronym for over-the-air) update feature, 8.1 can be downloaded and installed directly through iTunes, which is the preferred method; we’ll elaborate on that shortly - however, current iOS 7 through 7.1.2 jailbreak users should unquestionably avoid the latest firmware. In the first truly significant revision since iOS 8’s initial release, Apple has introduced a number of welcomed features, improvements and bug fixes in the company’s latest 8.1 release, which supports the latest iPhone, iPad and iPod touch models, especially the iPhone 6 and iPhone 6 Plus and the upcoming iPad Air 2 and iPad mini 3, both of which are scheduled for release this week. As with every iOS 8 release, the vulnerabilities the Pangu team managed to exploit to achieve an Untethered jailbreak remain patched in 8.1, making it impossible for any device to jailbreak iOS 8.1 when employing the current Pangu tool. That being said, today’s news isn’t all bad, far from it. For more on the latest iOS 8.1 firmware and the next jailbreak, continue reading past the customary break!

iOS 8 Jailbreak 8.0.2 and iPhone 6 Plus Updating - Should I Update for an iOS 8 Jailbreak? - Recently, ensuing the release of both iOS 8.0.2 and 8.1 beta 1 (to those enrolled in Apple’s official Developer Program), we’ve received a plethora of questions pertaining to the former of the two latest releases. Interestingly though, said questions aren’t regarding whether there’s a jailbreak iOS 8.0.2 utility currently available, but instead something else related to jailbreaking.  Prior to delving into the previously alluded to question, it’s important to understand the background of both the latest 8.0.2 public release and the current Untethered jailbreak utility. The latter of the two aforementioned items was regrettably patched by Apple when the company issued iOS 8 to the public, meaning the Pangu UnTethered 7.1.2 utility cannot jailbreak 8.0.2 on any device, including the new iPhone 6 Plus and iPhone 6 models - the tool will only ever function on 7.1 through 7.1.2, until the Pangu Team releases an updated iteration of Pangu. As for iOS 8.0.2, continue reading past the break for more on the firmware and the mostly commonly asked question we’ve received as of late pertaining to both 8.0.2 and the next jailbreak!

Apple Releases 8.0.2, Is it Possible to Jailbreak 8.0.2 and Should I Update? - Today, ensuing the short-lived iOS 8.0.1 update, which was recalled shortly following its release, Apple issued 8.0.2 to the general public. Like its predecessor, 8.0.2 effectively patches the Pangu UnTethered Jailbreak - that’s not necessarily a bad thing and we’ll elaborate on the topic shortly. In addition to being available for download immediately via both iOS’ built-in OTA (short for over-the-air) ability, 8.0.2 can be downloaded through iTunes - however, current jailbreak users should certainly avoid the update. In what appears to be a hotfix of sorts, iOS 8.0.2 provides a remedy to the peculiar connectivity and Touch ID issues brought on by iOS 8.0.1. In addition to correcting the blatant usability issues in yesterday’s release, as with 8.0, the vulnerabilities exploited by Pangu to achieve an UnTethered jailbreak remain patched in 8.0.2, making it impossible for any device to jailbreak 8.0.2 UnTethered using the current utility. For more on 8.0.2, as well as the firmware’s jailbreak status, continue reading!

Apple Releases 8.0.1, Is it Possible to Jailbreak 8.0.1 Untethered? Update Breaks Touch ID And Cell Service - Today, exactly one week after releasing iOS 8 to the general public and, in turn, effectively patching the Pangu UnTethered jailbreak, Apple issued the company’s first iOS 8 update in the form of 8.0.1. In addition to being available for immediate download via iOS’ built-in over-the-air (commonly referred to as OTA) update ability, 8.0.1 can be downloaded via iTunes - however, whether your jailbroken or not, all users should avoid 8.0.1 for the time being. Interestingly enough, it appears as though the firmware not only breaks cellular connectivity for a number of iPhone owners, but also causes significant issues with Touch ID. Beyond the rather glaring usability issues though, 8.0.1’s predecessor, 8.0, patches the vulnerabilities exploited by Pangu, rendering the the UnTethered utility useless on the latest firmwares and making it impossible for the public to jailbreak 8.0.1 UnTethered on any device! For more on 8.0.1, as well as jailbreaking, continue reading past the break.

Biggest iOS 8 Jailbreak 8.0 iPhone 6 Plus Update Yet, Utility in Sight - Last night, ensuing yesterday’s exciting iOS 8.0 jailbreak coverage, another substantial update unfolded. Previously, we mentioned that the two primary dev teams currently on the jailbreak scene, namely Pangu in the aforementioned coverage, are currently in the process of developing a new jailbreak tool for iOS 8 and the iPhone 6 Plus. Now, MuscleNerd of the evad3rs (the legendary group that brought us the first iOS 6 and iOS 7 UnTethered jailbreaks, dubbed evasi0n and evasi0n7 respectively) tweeted out a clue as to the team’s second informal iPhone 6 Plus iOS 8 jailbreak update. For more on the latest in the world of jailbreaking, continue reading past the break, as it’s a rather important and incredible jailbreak update!

New iOS 8 Jailbreak iPhone 6 Plus 8.0 And All iDevices Update, There’s Progress - Recently, both the iPhone 6 and the iPhone 6 Plus, the latest and biggest refresh to Apple’s hardware lineup, pun intended, created quite a frenzy in the world of iOS and Apple enthusiasts. Stores quickly sold out of both iPhones, with the iPhone 6 Plus in critically low supply, the devices are receiving rave reviews and customers couldn’t be happier, but what about an iPhone 6 Plus and iPhone 6 jailbreak for iOS 8? Thankfully, and interestingly enough, there’s been a rather substantial iOS 8 jailbreak 8.0 development since our recent coverage on the status of the next UnTethered jailbreak utility. Also, beyond the iPhone 6 and iPhone 6 Plus, iOS 8’s adoption rate is purportedly up by approximately 30% of all iOS-based devices, confirming that a vast number of jailbreakers perviously jailbroken on iOS 7.1.2 are desperately seeking a new jailbreak for iOS 8.0. Additional information on the forthcoming iPhone 6 Plus jailbreak iOS 8 tool can be found after the break.

Apple Releases iOS 8.0, It’s Impossible to Jailbreak iOS 8 With Pangu Prior to iPhone 6 Plus Launch - Today, prior to the iPhone 6 and iPhone 6 Plus launch, Apple released iOS 8 to the general public, effectively patching the longstanding UnTethered Pangu jailbreak 7.1.2 utility. While we don’t recommend updating at this point, in addition to being available for immediate download via iOS’ built-in OTA (short for over-the-air) update ability, iOS 8 can also be downloaded via iTunes. Also, as previously alluded to, jailbroken users should avoid the massive update at all costs. As mentioned on Evasi0n Jailbreak earlier this week in a preceding article, Apple would, and now has, closed a number of the key vulnerabilities exploited in the Pangu jailbreak, rendering the utility useless on 8.0 and making it impossible for the public to jailbreak iOS 8 Untethered. However, with that said, it’s not all bad, iOS 8.0 will revolutionize the future of jailbreaking - continue past the break for additional details regarding the next iOS 8 jailbreak utility.